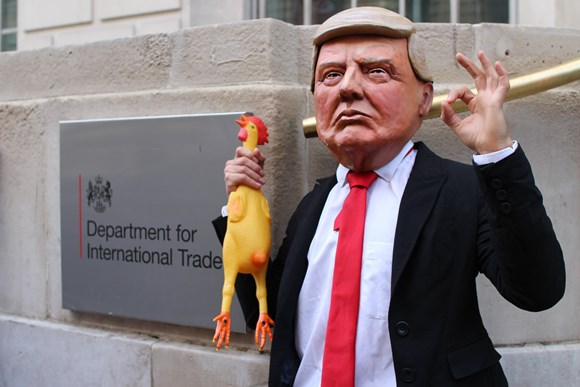 What the cluck? US food safety inspectors’ defence of chlorinated chicken doesn’t wash in the UK

The US is famous for the size of its food portions. True to form, the menu for a post-Brexit US-UK trade deal was “all you can eat” during Trump’s state visit this week. Even the sacred cow of the NHS was briefly on the table, until the silver cloches were slapped back on by Theresa May lest diners suffer indigestion.

One question is whether Britons can stomach American food products that could follow a trade deal. As Trump sat down to a sumptuous Buck House banquet, Channel 4’s Dispatches aired The Truth About Chlorinated Chicken, an undercover report from a US meat processing plant. We were left feeling queasy as a UK hygiene inspector said US practices fall fowl of our standards and campaigners provided shocking evidence of workers’ rights abuses.

Scientists told us that although chlorine washing is meant to blitz bacteria, it can leave up to 10% of salmonella and campylobacter behind. More worryingly, Debbie Berkowitz, the former chief of staff at America’s health and safety regulator, OSHA, said the sector has “some of the highest rates of amputations of any industry”. In the 36 states that collect data, around 50 amputations are recorded every year by US poultry companies. This compares with four in the UK, equivalent to a much lower rate per employee. Berkowitz added that some workers report wearing nappies because they are denied toilet breaks.

Response: The US Government’s Food Safety and Inspection Service (FSIS) breezily told consumers not to worry as it “successfully carries out its mission to protect public health” and went on to call Berkowitz a rotten egg. “Unfounded allegations from former OSHA staffers are not credible contributions to this dialogue,” was their only response to the allegations, which were backed up with evidence.

Impact: The FSIS’s bizarre response contrasts with the convincing arguments of the US’s vocal ambassador to Britain, Woody Johnson. Johnson, a close friend of Trump, is also a broadcast news regular arguing for a comprehensive UK-US trade deal. In characteristically folksy terms, he told BBC1’s Andrew Marr Show that “We have five million Brits coming over [to the US] every year and I’ve never heard a complaint about anything to do with chicken”. He said there would have to be a deal where Britons are “given a choice… if they like it, they can buy it; if they don’t like it, they don’t have to buy it”.

Dispatches concluded that the debate is as much about standards, workers’ rights and animal welfare as it is about chicken. It’s also about competing post-Brexit visions. A free ranging conversation about trade depends on whether Britons decide if people, through the market, or the state determine the standards we adopt. Trump’s offer of a “phenomenal deal” could yet be worth no more than chickenfeed.