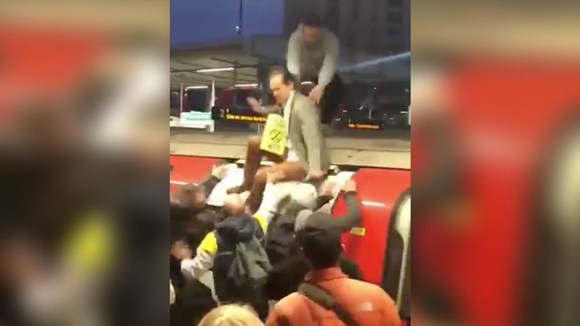 In John Locke’s social contract theory, the right of revolution is one of the most fundamental political rights. When the body politic believes that the government of the day is no longer acting in their interest, they have the legitimate right to revolt against it. Throughout history the right of revolution, or rebellion, has been used to justify various political upheavals.

This week marked the high point of Extinction Rebellion’s October Revolution. Motivated by the government’s negligible approach to the global climate emergency, the protesters attempted to paralyse the streets of London by gluing themselves to roads, bridges, trains and at one point even airplanes. However, in a similar fashion to the original October Revolution in Tsarist Russia this was not a mass movement but an elite exercise.

Response? On Thursday, a video emerged of a man being dragged off a Jubilee line train in Canning Town while other footage showed protesters incongruously gluing themselves to Dockland Light Railway, an electric train which does more to lower emission than any other type of transport available in London.

Blocking City Airport is very different to disrupting the daily commute of ordinary people whose journeys are undertaken via public transport rather than private jets. Compare this to le gilet jaunes whose weekend protests were constrained by the need to earn a living and a clearer picture of the Extinction Rebellion’s potential hypocrisy emerges.

For instance, David Copus a software engineer aged 47, was quoted in The Times as apparently having taken unpaid leave in order to be at the protests in London. He was clearly gaining a lot from it. “This struggle bonds you to people immensely,” he said. “I feel like I’m really doing something with such purpose. I’m going to find it very difficult going back to work after this.”

Impact? Extinction Rebellion’s legitimacy in framing the debate on an issue of immense magnitude therefore must be questioned. It seems that it’s right to revolt is a form of privilege only for the affluent few.

Framing climate change as a matter of justice rather than economic externalities by jumping on trains in two of London’s most deprived areas should really lead us to question who is out of touch.

The climate emergency is undoubtedly upon us, but this week the narrative on the Extinction Rebellion began to shift.  To save the world from extinction, the right to revolt must be widened and broader coalitions must be formed.

As with any decentralised social movement, it’s ability to communicate it’s message depends on acting coherently and strategically. The next few weeks will reveal whether the rebels can bounce back from this blunder.