Every time I go outside for a shop, I am greeted by the spectre of the BT Tower reminding me to stay at home.

It is a simple message. One which the UK public has understood clearly, for the most part. Government messaging has centred on this point and largely succeeded in encouraging social distancing, but their fixation on three-word slogans has borne little fruit in other areas.

A communications strategy based on virtually the same message has two major negative consequences: it can be frustrating for listeners who have already got it (especially if they’ve understood it for weeks) and it can leave a clarity gap which other organisations and sources of authority can fill.

Yesterday (16th April), a leaked letter from the Association of Directors of Adult Social Services discussed how ‘contradictory messages’ have created ‘confusing and additional workload’ for workers who have opted for the most cautious approach whenever unsure of what to do. This brings attention to the key contradiction in the government’s strategy: a simple talking point should not be confused with refusing to give nuance and explanation.

The pitfalls of this strategy were evident yesterday during the Health Minister’s round of interviews. Matt Hancock getting angry at having been ‘interrupted’ by interviewers who asked for clarity did not win him much sympathy. This contrasts sharply with a presentation that same day by Angela Merkel, who has been hailed as Germany’s ‘crisis manager,’ and who has demonstrated being on top of the detail, clear, and delivering a more subtle message. However, Germany’s successes in testing and diagnostic infrastructure have arguably made communications for their government easier.

The UK government’s consistent talking point that their measures have always been backed by science also seems to ring hollower each time they are repeated. From wide-scale scientific disagreements over the assumptions of the  Behavioural Insights (‘Nudge’) Unit, to high-profile arguments between ministers and leading experts, such as Professor Neil Ferguson, on the scale of the state response, it seems that reiterating that line is no longer appropriate.

Monolithic messaging also has another major impact: it leaves UK employers with a significant responsibility but ill-equips them with the information to make decisions.

Government messaging has allowed some employers to require employees to attend jobs in person, such as HS2 and other construction projects which are going ahead despite opposition from local government. Others have used this as an opportunity to take initiative and demonstrate wider social responsibility in our age of stakeholder capitalism. Pret a Manger, Burger King, and KFC have all announced partial re-openings, as part of a targeted effort to provide food services to front-line workers and to ‘do our part.’

The government’s abdication of decision-making has also been compounded with conflicting official advice, such as information published this week on the status of company directors by HMRC being more restrictive than official guidance given elsewhere. This is part of the wider trend where employers are being empowered to make decisions for which they lack clear information.

It might be too much to ask for a nuanced policy projected onto the BT Tower. Yet, after weeks of hammering, the ‘message’ on the importance of staying home has been well-received and over-reliance on repeating that line has too often been a screen to hide from deeper concerns.

Locked Down, Plugged In

On a Thursday in March, as I watched the UK government’s ‘Herd Immunity’ press conference, I wondered how my day-to-day might be impacted by these inexorable events. I didn’t have to wait too long to find out. That same day, my university announced an end to in-person activities. After just a few minutes digesting that […] 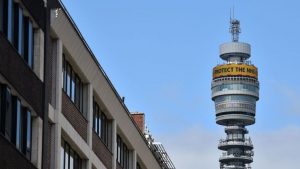 Every time I go outside for a shop, I am greeted by the spectre of the BT Tower reminding me to stay at home. It is a simple message. One which the UK public has understood clearly, for the most part. Government messaging has centred on this point and largely succeeded in encouraging social distancing, […]