Vicky Ferrier is a leadership development consultant and specialist partner to Eterna Partners. We asked for her thoughts on leadership effectiveness in 2019.

“In the final stages of the Agreement, Thursday, Friday, I think [Mo Mowlam] played quite a crucial role in advising, cajoling and shifting things on.  She changed the weather…she altered the atmosphere.”

When, in 1998, an unconventional company of politicians and civil servants pulled off the historic achievement of securing the Good Friday Agreement, and bringing an end over 40 years of conflict on the island of Ireland, it was due in no small part to the efforts of the late Mo Mowlam.

She arrived as Northern Ireland secretary in 1997, when the job was widely considered a dead end. However, Mo, intuitive, disinhibited, an excellent relationship builder, not only brought the opposing parties to the table but helped persuade a country of divided communities to come together for the sake of peace and progress.

Mowlam’s singular role in the Good Friday process has been largely obscured by Prime Minister Tony Blair and Taoiseach of the Republic of Ireland, Bertie Ahern according to Dr Margaret O’Callaghan, reader in history and politics at Queen’s University.  Partly because she died shortly after the agreement was signed, but also because of ‘the usual propensity to write women out of the record”.  However, Mowlam’s influence can be discerned as much in the silences of the official account as its entries.  Hers was a networked approach to leadership, one characterised more by empowering people and building common ground, than in seeking a personal legacy.

Fast forward twenty years, and another formidable female politician is also grappling with a similarly intractable set of irreconcilable interests.  Yet Theresa May, whose election slogan was founded on ‘strong and stable’ leadership, appears isolated and increasingly at the mercy of events.

While May is not lacking in leadership, I’d argue that she is stuck in an old definition of it: individualistic, linear, hierarchical.  It’s a leadership that’s at odds with the highly networked, connected and complex times we are living in.

Harvard’s Ron Heifetz has been promoting a similar vision of leadership since the 1990s, statingthat a central function of a leader is mustering the courage to interrogate reality. Leaders don’t answer those questions themselves– that’s the old definition of leadership. Leaders certainly provide direction, but that often is through posing well-structured questions, rather than offering definitive answers. This goes hand in hand with listening, which is subtler than people think: good listening is fuelled by curiosity and empathy.

Exercising leadership creates what Heifetz calls disequilibrium: the role of the leader (the authority figure) is to balance stability with periods of stress or conflict.  When the change required is significant, disequilibrium will be experienced over a sustained period, but this must be carefully paced. If the pressure gets too high, everything will blow up.

Dr Maria-Adriana Deiana writesof the “remarkable” contribution cross-community party, the Northern Ireland Women’s Coalition (NIWC) made to The Good Friday Agreement. The NIWC put an emphasis on maintaining the inclusive character of the negotiations processand in keeping open the lines of communication with civil society and political groups excluded from the talks. As Danielle Roberts explains, they also had to find creative ways to navigate the hostile terrain of the male-dominated peace talks and establish working relationships with a wide array of actors.

It seems if we are to make progress on something truly meaningful, like ending decades of violence, leadership cannot reside only in “the leader”; rather it is distributed through a complex web of relationships uniting behind something far bigger than any one individual. In leadership coaching we call this creating an atmosphere of “us-ness”.  This is difficult work, usually avoided in favour of politics and the pursuit of personal agendas.

With her strong need to be perceived as a bloody difficult woman, someone who is on a mission to get the job done, alone, Theresa May is exercising leadership but in the old-fashioned, individualistic way.  With the Brexit bomb ticking, we need to alter the atmosphere. It’s time for Mo leadership. 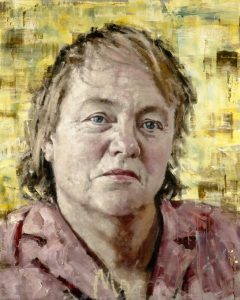 Guest blog: Mo offers May a lesson in networked leadership

Vicky Ferrier is a leadership development consultant and specialist partner to Eterna Partners. We asked for her thoughts on leadership effectiveness in 2019.﻿