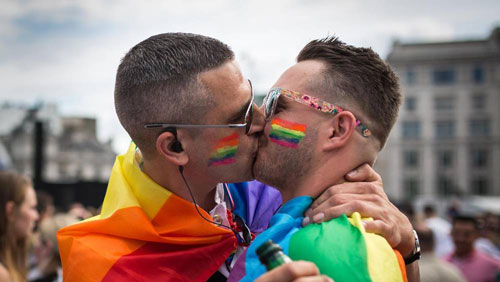 Thousands of people will descend on London tomorrow for the Pride in London parade, an annual celebration of the LGBTQ+ community.  Yet what began decades ago as a political protest movement is again under attack for creeping corporatisation.  Once an underground symbol of defiance, the rainbow flag has been appropriated by a host of brands and businesses in recent years, many of whom now stand accused of ‘pinkwashing’ – either exploiting the event to drive revenue or as an exercise in virtue-signalling.

In a Twitter poll this week, TheGayUK magazine asked respondents what they thought of brands that co-opt the rainbow into their logos during pride season, and some 58% said that it was simply to make money, with only 19% saying it was good for equality.  Pride London themselves also conducted a survey, which indicated that some 36% of people now primarily associate the Pride parade with commercial activity.

One of the brands to find itself in hot water was Costa Coffee, which launched rainbow coffee cups last month.  Campaigners were quick to question the brand’s motives, suggesting that it was a marketing exercise, pointing out that money raised through the sale of the cups would be spent internally rather than donated to recognised LBGTQ+ charities:  A spokesperson from Costa Coffee said: “We wanted to do this as a way to showcase our support for our LGBTQ+ colleagues and customers to celebrate diversity.”  This was somewhat undermined however, by suggestions from a French Costa Twitter account that it was a ‘pure marketing’ exercise.

Tesco, which is one of Pride London’s headline sponsors, faced criticism last year for a joint promotion with confectionery brand Skittles, which it has continued this year.  All-white packets of Skittles are being sold in stores across the UK alongside explanatory text which reads: “During Pride, only one rainbow matters. So we’ve given ours up to show support.”  Proceeds from each packet sold will be given to LGBTQ+ organisations chosen by the store.  Skittles’ brand owner Wrigley denied it was a marketing gimmick, saying that its decision to drop the iconic rainbow branding from packets was intended to show support for Pride in London and thus “celebrate diversity and inclusion”.

Some corporate stunts have gone down well – Royal Mail was ‘delivering with pride’ via a rainbow post box and Marmite continued to spread the love with special edition ‘Love it or hate it’ jars.  Barclays has also worked hard to demonstrate that it’s not just jumping on the bandwagon and that its sponsorship of Pride London is fully reflected by a deeper level of commitment to equality.

In 2012 it became one of the first bank to feature a same-sex couple in its advertising, in addition to promoting transgender women in its branches.

In Turkey, the Istanbul Pride Walk was banned by authorities this week for the fourth year in a row, only 48 hours before it was due to take place.  Those that defied the ban were met by riot police with tear gas and water cannon, underlining the extent to which LGBTQ+ rights are still under threat in scores of countries around the world.  While we may take many of these freedoms for granted now in the UK, what’s clear is that companies looking to celebrate Pride need to carefully consider the optics of their actions and whether their support is motivated by Rainbow Capitalism or a genuine interest in equality.  As Pride London themselves make clear to prospective sponsors, support during Pride season is one thing, but it’s arguably what an organisation does for the other 51 weeks of the year that really counts.